The Guys Behind the Veil 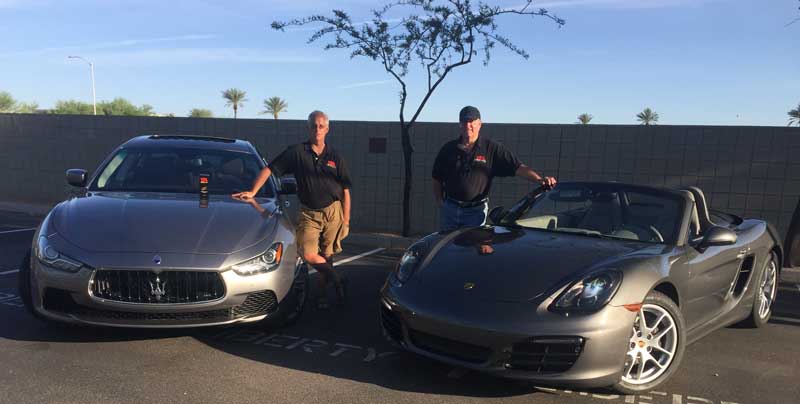 Necessity is the Mother of Invention


Do you hate speeding tickets as much as we do?


We can’t stand getting them either, the sick feeling one gets when nailed, being pulled over only to have to wait while the officer writes a costly citation and knowing that the time you’ve saved was now lost in the process.

You see, we’re car guys.  More than that, though, we love to drive, have an absolute passion for it. Many people think of driving as “work” and their vehicles merely as transportation–as a means of getting from point A to point B.  But if you are a real enthusiast, driving is not about getting to a destination, it is about the journey of getting there.

Shortly after the first laser guns began appearing on the road, Car and Driver penned an article where the editors had tried a variety of different home-made countermeasures–including installing a third (Tucker-like) headlight on the front.  Noble as their efforts were, they had limited success.  But all was not lost!


So after some extensive research, our team figured out how to defeat the underlying mechanisms of police laser operation using new stealth technology that we engineered from scratch.  It took nearly a decade of development and it’s led to several patents.


Before we began marketing Veil, we wanted to get the product tested and validated by a recognized testing authority of that time.  We weren’t about to sell a product that wasn’t proven.  So in 2004 and 2005 we attended Speed Measurement Labs (SML) yearly testing event, where manufacturers of countermeasure products are tested against real traffic enforcement tools–like police radar and laser–operated by real certified police officers.

I remember very vividly the range of emotions I felt when I drove a Veil treated vehicle toward the police officers targeting me.  I remember thinking, will it work and if it doesn’t we’ll have to go back to the drawing board.

Fortunately, we didn’t have to go back to the drawing board as we were able to reduce targeting distances significantly.  In fact, the police officers were shocked that we were so successful.  Our company was promptly awarded the coveted SML certification logo.

Despite the success of several authoritative reviews of Veil, both from SML and RadarTest (the two leading authorities of the day), our success wasn’t guaranteed.  We still couldn’t get the time of day from the leading automotive magazines for a full scale review of the product and the advertising dollars required were just too much for a small niche start-up.

In fact, over the years automotive magazines hadn’t been focusing much of their efforts on reviewing countermeasure products, such as radar detectors and the tests that were out there were very clinical and amounted to simply alert distance charts.

I thought to myself that the industry needed a fresh voice and perspective, so I personally decided to pioneer a reviewing style that has been since copied by many today.  I began writing about products that I actually used in the real-world and detailing my experiences with them; how they performed, how they behaved, and how easy or hard they were to use.

My first review was comprised of a 6000 mile multi-state trip that compared the virtues of the three leading radar detectors of that time, the Escort 8500 X50, the Beltronics RX-65, and the Valentine One.  Never before had a review been conducted in that manner.  It was fresh and very illuminating.  My review format was a huge success, the “Veil Guy” had established himself as a credible expert in the field.  This was only right, because I have always looked at myself as a enthusiast driver first and foremost who is willing to use anything and everything to enhance my driving pleasure, including the most effective countermeasures that I can purchase.

RadarRoy of Radarbusters and I founded radardetector.net, the longest-standing active and most senior radar detector and countermeasure forum, where I officially became known as the “Veil Guy.” Our continuing participation on the forum allows us to not only educate the consumer, but also to serve as a high-level of customer service.

My review style and content were unique, because I wasn’t biased or paid by any manufacturer to prefer their products over any other.  As video and multimedia technology evolved, I transitioned to videoing my in-car experiences of the countermeasures I reviewed with real-world police traffic enforcement encounters and incorporated them into my written reviews.  Again this was novel and proved very educational to would-be owners of countermeasure products.  Today YouTube is replete with such videos by countless drivers using in-car dash cams.


Over the years, my real-world observations have lead to some significant developments in the radar detector industry, most notably:

Quick responding radar detectors through the use of “band-segmentation” in conjunction with reduced filtering overhead.  The leading products from Escort, Beltronics, and Valentine are all now designed to be extremely fast reacting as a direct result of my discoveries, articles, and real-world reviews.

My early observations and feedback to Whistler about some of their products have enabled them to make improvements to their detectors which benefit all of their customers.

In a test of a laser jammer, we discovered and documented the phenomenon that we coined as “long-distance” punch-through.  This is scenario when the police laser beam divergence is large enough that the jammer heads transmitting pattern is insufficient at a far distance to effectively jam a police laser gun (btw, Veil eliminates this problem).  Up until that time, only close-range punch-throughs (PT) were thought to occur.

The Veil Guy continues to work with the major radar detector manufacturers in providing candid and expert feedback on pre-production or early-production products to help make their products that best that they can be.  When you use a radar detector today, there’s an awfully good chance that at least one aspect of your detector has been influenced by his contributions.

Our Mission – Make You an Educated Consumer and a Protected Driver

Our mission, with my company’s product(s), my website(s), videos and eBooks, is to make you an educated consumer so you can purchase the best product(s) within your budget that best fit your needs and to protect your driving privileges.

Our Goal – For You to Drive Safe, Smart, and Protected


Our #1 goal is to give you the tools, knowledge and abilities to: “Drive Safe, Drive Smart, and Drive Protected.”

Need help? Then, contact us direct 24/7/365 by using the contact form on this website. Typically, we will get back to you within the same business day.