Police Laser: How to Avoid a Lidar Speeding Ticket

What is police lidar and how you can avoid getting speeding tickets. 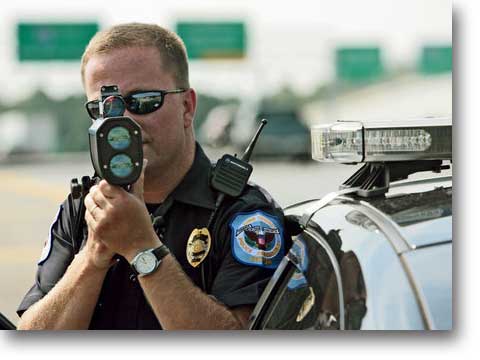 What is police laser?

Police laser or police lidar, as its often referred to, is lidar used for measuring speed and for the issuance of speeding citations.

LIDAR is an acronym for LIght Detection And Ranging.  Lidar is mainly used for accurately measuring distances.

Before we discuss how you can protect yourself from police laser traffic enforcement, let’s first describe what it is.

A police lidar gun emits a highly focused beam of invisible infrared light in the near infrared region of light that is centered at a wavelength of 904nm and is only about 22 inches (56cm) in diameter at 1000 feet (300m), much tighter than the spread of police radar.

The short answer is, very.

Police laser is very accurate and can often determine you speed to the 10th of miles per hour.  Unlike police radar which directly determines a vehicle’s speed by measuring its doppler (speed induced frequency) shift, police lidar calculates speed by observing the changing amount of time is takes to “see” a series of reflected pulses of light over a discreet period of time.

Police laser was first introduced as a traffic enforcement tool in the early 1990s as a better alternative to police radar and offers police departments inherent advantages, namely:

Today’s fifth generation police laser guns provide superior construction quality with improved optics, circuitry, and speed detection algorithms that are far more advanced and are proving to be especially lethal to drivers on the roadways, including those who use expensive laser jammers.

Can police lidar be used at night?

Yes this form of traffic enforcement can be and is often used at night and speed measuring distances can increase significantly making it extremely hard to know that your speed is being clocked.

Can police laser be used in the rain or fog?

Inclement weather can certainly have a negative impact on an officer trying to obtain your speed.  Typically range drops from thousands of feet to a mere hundred or so.  Newer police lasers have an inclement weather mode which can help improve speed detection ranges, however, it’s been our experience that when the weather gets poor, laser isn’t used much as a means of speed enforcement.  It’s worth noting that even police radar is adversely affected by bad weather and ranges also tend to drop.

But in any event, just because the distance drops, doesn’t mean that police laser enforcement isn’t any less lethal.  It’s also harder for you radar detector to detect the infrared laser light in these circumstances.

Laser can be operated from very far distances, much farther than police radar, making it extremely difficult for the driver to know that they are being targeted.  Unlike police radar, police lidar can be operated at such great distances, police officers really don’t even have to hide like police radar operators, because it’s extremely hard to spot them from those extreme targeting distances.  Some laser guns can successfully measure your speed as far away as 4000 feet or more, though generally targeting distances are below 2800 feet.

Why is laser more lethal than radar?

Lidar enforcement technology was created specifically to target a select vehicle from a pack of them at much greater distance and precision than radar.  It is not uncommon to drive in certain states and find yourself being targeted at greater than 2000 feet.  It’s routinely done in Maryland and Virginia, for example (only New Jersey has restricted targeting to 1000 feet or fewer).

So at these distances the likelihood is that you won’t even see the officer at all and by the time you do, it will be far too late.

Long-distance targeting without advanced warning is what makes laser difficult to beat without a countermeasure such as Veil or a jammer (where legal) or both in combination.

Can police lidar guns take pictures for evidence against you?

Unfortunately, some guns do have the ability to take photos showing your vehicle and your speed, making it even more difficult to fight the speeding ticket in court, with the video evidence.  The good news these guns cost police departments upwards of $7000 apiece, roughly four to five times the cost of a conventional gun.  They tend to also be quite bulky.  The exception to this is the LTI SXB which is very small and has bluetooth connectivity to a smartphone which can do the recording. But in all my travels, I have yet to encounter such a unit.

A good laser detector can be very good at detecting laser, although without the protection that Veil provides, drivers typically have little time to react (see videos with and without Veil).  Only the Valentine radar detector has demonstrated that it can provide advanced warnings when other vehicles are being targeted ahead and around you.

How can you avoid laser speeding tickets?

So, now that we have defined the threat, let’s explore a simple way to protect you from being successfully targeted.

Veil is a patented stealth technology which works by absorbing police laser’s infrared light pulses (much the same way sunglasses absorb the visible sunlight). This makes it much harder on the guns to see their own reflected light pulses. The most reflective parts of an automobile or motorcycle are its headlights and license plates.

By treating them with the Veil, the remaining and less reflective parts that are not treated won’t give the guns enough of a reflection that they require at a given distance to be able to obtain a speed reading. This buys the driver precious additional time to safely react and to slow down during an attempted speed measurement.

Discover how Veil can help keep you ticket free.