The Whistler CR93 and Whistler CR88 radar detectors, demonstrate that Whistler continues to push their own performance envelope. 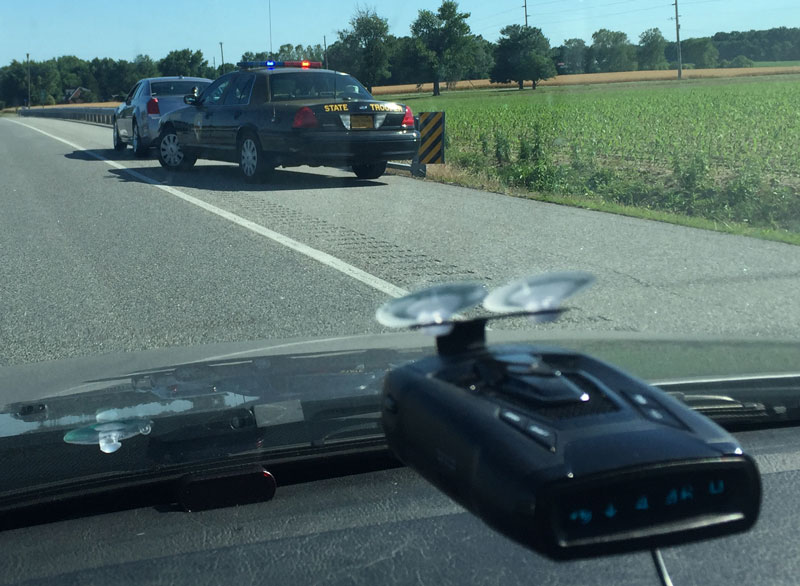 As has been the case since the Whistler Pro 78, I have been a sneak peak of what is to come while also being afforded the opportunity to provide early feedback which can lead to last minute tweaking before a full production run occurs.  And I must say, it’s been a genuine pleasure experiencing the improvements that Whistler have made with their radar detectors since that time.

I have often written of the similarities between Whistler and Valentine Research in terms of their technical nature and to their steady pace in design improvement year after year.  This is due to the fact that the engineering departments at both companies have a significant influence in the development of their detectors.  With these new Whistler radar detectors, these improvements are readily apparent.

The big news for 2016 is that Whistler has made noticeable increases in both Ka-band and K-band police radar sensitivity while also introducing a novel capability (more on this later).

Externally nothing has really changed from the earlier Whistler CR90 and Whistler CR88 models, which is say the construction quality is quite good.  The cases are made of a low-gloss impact resistant plastic.  The topside four buttons have good articulation and tactile feel and the larger and higher resolution OLED display is easily readable in a wide variety of lighting conditions.

The GPS-enabled CR-93 comes with a USB connection located on its right side along with the power and headphone jacks.  On the left side are located the power/volume and bracket release buttons.

Whistlers have always been extremely quick in alerting to detections to both radar and laser and these two detectors are no different.  The alert signal strength ramp remains some of the most accurate, quickly responding, and predictable both in visual and audio forms.  Like the Valentine V1, the “latch” times are exceptional again being representative more closely representative of what the detector is seeing as any given moment.

The alert duration of these Whistlers to police laser falls in the upper two second range.  In my opinion the best alerting to laser comes from the V1 with its trailing alert time of slightly less than two seconds when the police lidar signal is no longer detected.  These times are far more useful than the 9-11 seconds that the Escort and Beltronics detectors exhibit.

Given the great capabilities of these Whistlers to detecting police laser, I have asked engineering to reduce their durations by another second to more closely align to the V1.  I am pleased to report that they are going to take my advice on this.  Now you will know more precisely when officers are targeting you, when they are not, and when they are struggling and re-aiming.  This makes these Whistlers, like the Valentine 1, one of the best to pair with our stealth coating (see following video).


The CR93 is GPS equipped and comes equipped with a redlight and photo enforcement database that can be updated with the provided USB data cable and a PC.  The detection range can be altered to reduce false alerts when driving on an adjacent highway.  The CR93 can alert to both a redlight camera location and police radar at the same time (see following video).

The detection performance of the CR88 is identical to the CR93, the only difference being that the less-expensive CR88 lacks GPS and a photo enforcement database.

Top of the line Whistlers have always been very good with Ka-band especially with Ka Max mode enabled, but K-band has not been as stellar.  For drivers like myself who encounter low-powered I/O K-band on a regular bases this has been a slight concern of mine, although I can say that they have never let me down yet.

In any event, engineering specifically focused on improving K-band sensitivity to make it more inline with their Ka band performance.  I noticed about a 20-30% improvement in detection distances over the previous Whistler CR90/Whistler CR85 detectors.  This equates to about 2-2.5dB increase in sensitivity.

In my opinion, this puts these new Whistlers more inline with previous Escort’s S4 platform of detectors but not at the level of the new S4-based Escort iX radar detector which has also seen an increase in sensitivity of about the same over previous S4s.

Another aspect of detection performance that was noticeable is an increase in off-axis detection, which I now consider quite good.  Previous detectors were somewhat deficient in this department.  As a consequence, these detectors do a better job of alerting to radar around curves and from detections from behind.

I asked the head of engineering if there was a geometric change to the radar horn and they confirmed that indeed there was.

Unfortunately these improvements do not come without one drawback and that drawback is slightly reduced sensitivity to X-band something that I confirmed this during one of my drives in NJ where X-band is still encountered with some regularity.

The good news is that only a handful of states (New Jersey, Ohio, North Carolina, and parts of Mississippi) still use X-band, so the vast number of drivers need to be concerned about it.  The trade off to gain K-band performance is certainly worth it since K-band is used far more substantially throughout North America.

As I alluded earlier, detection to police laser is very very good and I would rate it close to the V1, which is by far and away the best.  What’s more impressive is the amount of different police lasers that these detectors can detect.  For instance, these detectors can alert to Dragon Eye police lidar, something that you will now experience in states like Delaware and Maryland, two states that are close to me.  I have also observed that the CR-93 alerted to police lidar scatter, something that very few windshield mount radar detectors can actually do (see following video).

Both of these detectors provide novel feature, the ability to warn its owner that their detector is actively being interfered with by K-band vehicle collision avoidance systems.  When this feature–called FDSR or field disturbance signal rejection–is enabled, the detector will indicate FDSR on the display screen as well as a signal strength of the interference.

The thinking here is that the detector is letting you know that during the situations, detection to bona fide police radar may adversely be impacted.

Why is this important?  While most well-designed detectors today are doing a better job of filtering out these frequency modulated K-band sources, they are not informing you know that their detection performance is being hampered.

I have actually encountered this situation with an Escort Max 360.  I was once stuck behind an Audi that the Max 360 was effectively filtering out, however when I turned off the road and encountered a 34.7 Ka-band source, the 360 failed to alert to it.  I had to power the 360 off and then back on for it to regain the ability to alert to the constant-on signal.

Without question the thing that is going to distinguish the really great detectors today is not just the filtering out of these K-band systems, but to retain their ability to detect to genuine police radar of any band during such times of interference.  Truth be told, the sensitivity of most detectors today are plenty sufficient.

The real challenge is overcoming these collision avoidance systems.  There really is no way to know how any detector behaves when it is being interfered with.  What happens when you are close to one vehicle?  How about two?  Three?  We simplly can’t know.

Whistler has taken the unique step in letting you know.  When FDSR is enabled, it is very alarming (no pun intended) to see just how often this feature activates.  On one trip to New Jersey, the shore traffic was very heavy and at times the CR-93 indicated FDSR warnings for extended periods of time.

Keep in mind that Whistlers have not employed advanced DSP (digital signal processing) like Escort and Beltronics detectors.  This decidedly puts the CR93 and CR88 at a disadvantage, since DSP not just provides increased sensitivities but more horsepower to the table to make these sorts of signal processing distinctions.  The use of DSP, though, doesn’t necessarily mean that this is always the case.  It only means that there is a greater potential that there is.  Even the fully digital processing of the Max 360, the use of DSP is not flawless.

As these K-band systems continue to proliferate, it is possible that the next generation of Whistlers will have to incorporate DSP to remain competitive.  If this turns out to be the case, I would expect to see an increase of $50-$75 dollars in pricing.  Even so, such detectors would remain extremely good values for the dollar as compared to detectors costing north of $400.

Even with FDSR disabled, these Whistlers can be configured to do a fine job at silencing spurious alerts as demonstrated in the following video (where an STiR remote without any such filtering was alerting).

Without question, these new detectors afford their owners exceptional value for the money and are the best values going in the under $300 price range.  I am extremely comfortable at driving long-distance through multiple states at speeds that would risk my license.  I consider either of them one of the best radar detectors currently available.  They’re that good.

Both detectors are available at RadarBusters and I believe the CR-93 offers the better overall value.