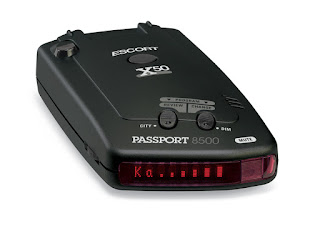 
The ultimate expression of a legendary radar detector

New products, of late, have been coming fast and furious from both Escort (and its sister company Beltronics).

To maintain their respective product line-up’s “freshness,” some of their stalwart products have been getting a make-over, such as the Beltronics STi Driver whose recent replacement is the freshened Beltronics STi Magnum.

Perhaps, the “black” reference could be dropped, in time, from the nomenclature as the “silver” models will be no longer. This is the only detector, that I am aware of, that derives part of its name from the color of its chassis. Or, perhaps could it be to suggest a high-performance version, a reference “borrowed” from Mercedes’ playbook with respect to their uber AMG Black editions. Or, perhaps, I have seen one too many Top Gear episodes and am over thinking this.

The Escort Passport 8500 X50, itself, has spanned two underlying platform designs—originally starting with the S7 platform followed by the more recent M4 platform that appears in all Beltronics and Escort conventionally designed radar detectors.

The higher-end (and higher-priced) M3 platform is reserved for both companies’ “halo” products which possess the special capability of not being detectable by radar detector detectors while providing class-leading performance.

I have owned a good number of Passport 8500s over the years and while the newer (M4) models shared the same name as their earlier (S7) counterparts, these newer 8500s felt like different detectors, altogether.

In my opinion, some aspects improved and others, to be blunt, did not.

On the credits side of the ledger for the M4 versions, Ka-band reception noticeably improved over time. This is a good thing too, as most newer police radars that are being put into service operate on Ka. In the US, three frequencies are used—33.8Ghz, 34.7Ghz, and 35.5Ghz—of the very wide Ka band.

Another ” improvement,” I believe, was the replacement of the earlier models’ speaker setup with a much louder one and to nuance this attribute even further, although I appreciated the sheer loudness of the updated speaker design, I preferred the tonal characteristics of the older ones.

This speaker setup first made its appearance with the Escort Passport 9500i, itself being an M4 based detector.

Another good aspect of the M4 design is its stability in maintaining proper calibration. As wonderful as the S7s were, they were more prone to falling out of calibration due to their circuitry, requiring a return to the manufacturer to address. The M4s have proven quite a bit more “reliable” in the field.

On the debits side of the ledger for the M4 versions of the 8500 X50s, it appeared that with the pickup of Ka-band performance, relative to the earlier S7 versions, it came at the relative “expense” of both X-band and K-band reception performance (even if only slightly). While X-band remains seen in a more limited number of states, K-band is still widely used.

I have seen this approach (taken) across other models from a number of other radar detector manufacturers (namely Cobra and Whistler).

And to be clear, Escort’s M4 8500 X50s perform noticeably better on these two other frequencies (both relatively and on an absolute basis) than these other manufacturers’ designs.

Another detractor, for me, with the newer M4 versions of the 8500, was the less-than-stellar signal-ramp.

With the introduction of the M4-based 8500, gone were the silky smooth and linear alert ramps (audio “Geiger” tones) of the long-established S7s. In their place were “choppy,” non-linear, and far too aggressive alerting that made it more difficult to distinguish between instant-on or constant-on radar and nearly impossible to make an accurate threat assessment by gauging the actual distance to any given radar threat with such models.

My general feeling has been that these newer radar detectors—that employ these far too aggressive signal ramps—are less refined than their earlier brethren.

So, it was with great pleasure when I observed this latest iteration of the Passport 8500 X50, to behave more like the earlier S7-platformed 8500 X50s did.

I do believe this makes the 8500 X50 Black the first Escort model to finally reintroduce the silky alerting style** that has for too long been absent in their product lineup and I sincerely hope that this superior approach re-emerges across the entire line of Escort going forward.

(**Note: While the ramp is far more S7-like, there appears to be a somewhat “abrupt” drop-off at the tail end that feels like an un-natural squelch. IMO, still has a little room for improvement.)

Whistler has long been employing convex lens designs, beginning in the early 1980s with their Spectrum and Q2000 dual-band X and K detectors—with the intent of improving reception performance to certain frequencies and/or attenuating unwanted ones—by bending and focusing select wavelengths of RF.

Escort and Beltronics eventually adopted a very similar lens design with the STi Driver introduced in 2006. I suspect, a percentage of any observable improved performance and/or false rejection to the X50 Black may, in part, be attributable to this design element.

Once I accumulate more real-world radar encounters, I will better be able to gauge the relative performance of the Black.

In the meantime, I am heartened to see Escort return to its fundamentals—the building of radar detectors which provide solid performance while maintaining overall balance, refinement, and, yes, grace.

Discover how Veil enhances the performance of your radar detector.