Beltronics STi Magnum Review: An Answer to the Escort Redline 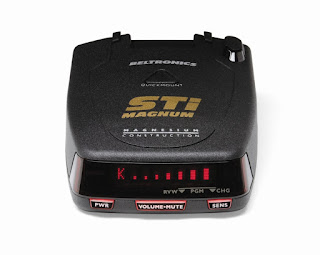 Before I delve into the particulars of the new Beltronics STi Magnum dash mount radar detector, I think it prudent to go over a brief history lesson with all y’all.

It was nearly six years ago, when Beltronics forever changed the landscape of the radar detector industry by inventing an extremely sensitive radar detector that was immune from detection by a specialized piece of electronics, called a radar detector detector. RDDs, as they are called, are used by traffic enforcement, to electronically sniff out radar detector usage in certain areas where their use is forbidden. Up until that time, the notion of such a detector was the stuff of legend, like that of Pegasus, the mythical flying horse.

The Beltronics STi Driver was a seminal product, not only because of its novel abilities, but also because it was the first dash mount radar detector ever sold by Beltronics or (its sister company) Escort that exceeded the price of Valentine One, which at $399USD, had been the long-time high-water mark in price (and performance).

Yes, the original Beltronics STi Driver was truly a breakout product and, truth be told, the mighty Valentine One, has been spending less and less time on my windshield ever since.

However, in the nearly six years since its original debut in North America, other (and more significant) detectors have come from both Beltronics and Escort, based upon the same M3-platforum, that have surpassed the performance capabilities, as great as they were, of the STi Driver: the supremely capable Beltronics STi-R remote, the impressive all-in-one high-end remote from Escort, the Passport 9500ci, Escort’s top-of-the-line dashmount, the Redline, and most recently, the all-time best detector ever, the Beltronics STiR Plus.

Each of these models, has shown a steady, if not subtle, performance improvement over the life of the M3—leaving the original STi Driver, how should I say, somewhat long-in-the-tooth.

There has been a nagging and persistent suggestion by a few online forum members that the original STi Driver’s performance was “neutered” a bit, by design, at the outset (allegedly sourced from someone with intimate knowledge of its engineering).

So, as impressive as it was, at the time, these same folks have been under the long-felt belief that there was more performance capability that could have (should have) been unleashed. Whether or not this was actually the case, or whether the engineering team simply found ways over time to improve on the original design &amp; materials, or both, really isn’t important, in my opinion, because these sorts of dynamics are the same in many, if not all, manufacturing, whether it be of computer CPUs, cell phones, or automotive engine designs.

What is important, is that both Beltronics and Escort have continued to offer evolutionary performance improvements and increased value to the consumer, with each subsequent introduction of their high-end products; something that in any event, I find incredible, given the astounding levels of performance that had already been achieved with each of their earlier models.

The brings us to the STi Driver’s replacement, the STi Magnum. The product has been described to me as an “opened-up” Driver. Something along the lines of the Escort Redline, except from Beltronics.

According to Beltronics’ press release, the STi Magnum provides a 60% greater improvement over its predecessor, the STi Driver. Technically, this would amount to approximately 4dBs in sensitivity improvement and, on its surface, would effectively eliminate the performance “deficit” between Beltronics’ high-end dashmount and Escort’s that could be observable in certain speed radar encounters.

But, knowing the wizards at Beltronics, the new Magnum, could prove to be more than simply their version of the Redline. For starters, I would expect a far more useful signal strength ramp, something that we saw in the new STiR Plus remote (the signal ramp design of the Redline has long-tempered my enthusiasm for it). Nor, would it surprise me to see a bit better overall balance of performance/refinement out of the STi Magnum than the Escort Redline (just as I tended to prefer the earlier S7-based Beltronics RX65 (video) to the Escort 8500 X50 (video), detectors of similar design).

The STi Magnum is priced at $469, which is the same price point as the outgoing STi Driver.

What ever the STi Magnum proves to be in the real-world of driving, it is a most welcomed update to what I regard as one of the most significant dash-mount radar detectors ever produced (and one of my favorites). I am really looking forward to accumulating some serious miles on this new top-of-line model from Beltronics. I will share my real-world experiences in an in-depth review, in the near future.

Update: The Magnum has received an update that should bring its performance in the realm of the Escort Redline.  It now has the ability to be segmented.

Discover how Veil enhances the performance of your radar detector.