Is a radar jammer or radar scrambler really effective at jamming police radar?

How does a radar jammer work?

Active radar jammers work on the principle of interfering with or overwhelming the doppler shifted returned frequencies that occur from reflected radar waves that police RADAR employ to obtain a vehicle’s speed.

Are radar jammers legal to use?

Unlike police laser which can be legally jammed by laser jammers in most states, police radar can not be legally jammed anywhere. In fact, any attempt to do so (whether one is successful or not and most active radar jammers are not) is a federal offense and violates FCC regulations.

Radar detectors are a different animal, in that they are designed to only detect and alert to police radar and are safe to use as they

Are passive radar scramblers legal to use?

Late in 1997, the FCC also ruled that so-called passive-reflector type “radar scramblers” are also illegal to operate whether they are effective or not (they never have been effective) because the FCC considers any attempt as “malicious interference.”

While active radar jammers are illegal, they have proven to generally not work, especially against the latest digital police radars. 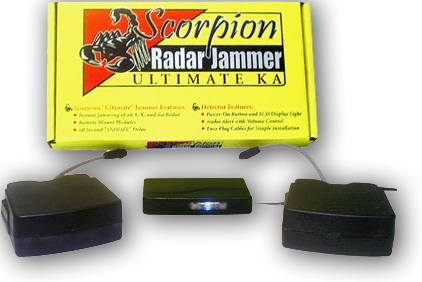 Older analogue radar jammers did have some radar jamming effect on older analogue X-band and K-band RADAR but were often bulky, cumbersome to operate, and ran continuously – setting of every radar detector in the immediate vicinity. Their use ended up adversely effecting drivers in front of you hit their brakes and slow down which presented potential safety problems for drivers who used a radar jammer.

One jammer that also showed some effectiveness was the Scorpion Radar Jammer.  We tested it years ago and found it to be somewhat effective against older X-band and K-band guns.  The Scorpion also had the distinction of only transmitting when you were being targeted and was also designed to jam Ka-band radar (a much harder band to do so), but we found that it was largely ineffective on that frequency.  The unit was also constructed like it was home-made (which it was) and it promptly failed on us completely, the electronics literally went up in smoke.

Furthermore, analogue jammers tend to lose calibration and eventually go out of tune – further diminishing their jamming effectiveness over time. 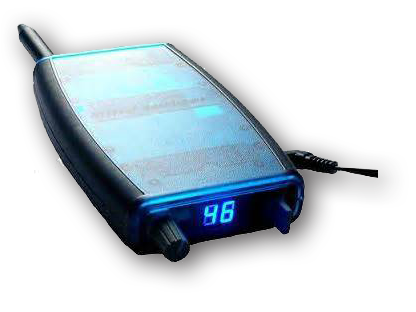 Today, advanced police radar guns can indicate to the officer that someone is attempting to interfere with them. They do so easily by monitoring the return frequency of the jammer during the time that the gun doesn’t transmit – a dead giveaway of the user of an active jammer.

In some cases, a jammer may inadvertently produce a higher indicated speed on the officer’s radar gun! Can you picture trying to explain to a police officer how his 95mph reading of you was introduced by your jammer and not by your actual speed?

At any rate, the technology has progressed today to be primarily digital, which makes them much more accurate, less prone to error, and extremely difficult to jam effectively.

ink about attempting to use a “passive radar jammer” or to passively disable or “scramble” police radar as your vehicle’s own reflections will most certainly overwhelm any small “passive jammer/reflector” by several orders of magnitude. These devices don’t even make good detectors!

Are there any effective countermeasures for beating photo enforcement?

While passive “jammers” have never been effective, there are a couple of other passive solutions that can in some cases beat photo enforcement systems.  The first one is a license plate cover that obscures the numbers in the visible spectrum of light.

The newer photo radar systems use infrared cameras which can be thwarted by an infrared absorbing material to black out the plate.  While your speed will still be measured, identification of your vehicle will be seriously hampered since your license plate is obscured, so there is no way to automatically issue you a citation in the mail.  You can learn more about that approach, here.

Are there any other ways to beat radar speeding tickets?

An even more ominous threat to the motoring public is currently being used and is much more difficult to detect, the likelihood of successful court challenges to issued tickets is much smaller, and it is now in widespread use.  That technology is called police lidar and it has proven to be a far more lethal speed enforcement tool.  You can learn more about this technology and the ways to reduce your risks to it, here.