Veil Home » Guides » Police RADAR: How Radar is Used & How you can Beat it

Police RADAR: How Radar is Used & How you can Beat it

What is police radar and how does it work?

RADAR is an acronym for RAdio Detection And Ranging.

Unlike police laser, police radar directly determines a vehicle’s speed by measuring the doppler (speed induced) shift of the return of its transmitted frequency (think of the sound you sometimes hear of an approaching or receding train or emergency vehicle).

How does it operate?

Police radar can be operated in two modes. The first is continuously transmitted or constant-on (CO) operation. Generally police radar such as this is easily detected at great distance with a radar detector.

There are certain speed traps used by police that utilize constantly transmitting police radar that are designed to be harder to detect by those who use radar detectors. Police can operate constant-on police radar from a “covered” position—hiding among heavy foliage of a median, for example, and pointing their police radar guns across the roadway at an angle—not directly at approaching vehicles. Such trap configurations can be very hard to detect even with the best radar detectors. It is not uncommon to encounter state troopers in New Jersey operating police radar in this manner.

A radar detector can’t alert to a signal that is not there. Unlike constant-on, a police radar gun is triggered by a police officer who must first visually see your vehicle. This form can be especially lethal when operated during the cover of night, from an on-ramp or overpass, or from a hidden position from the median or shoulder of a roadway.  Police radar is designed to be hand-held or permanently mounted to a police car. 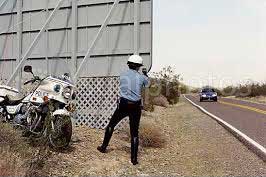 What types of police radar are used?

Most newer guns the police use operate on the super-wide Ka-band. K-band is still quite common, given its historical advantage to Ka-band. The oldest X-band radars, which have been widely used throughout the state of NJ, are slowly being supplemented with newer and smaller digital (DSP) Ka-band models and even more lethal police laser guns.

Radar transmissions are quite wide in their dispersion patterns and are often reflected in many directions. This gives a detector a lot of opportunities to detect them and as a consequence generally provides the driver ample reaction time to slow down while vehicles ahead are being targeted.

It’s also not particularly precise in pinpointing which vehicles are responsible for speed readings, requiring a visual confirmation by the officer. Some European radars—called Gatso and Multanova—are much narrower, ultra low-powered, polarized, and much harder to detect as a result even with the best radar detectors and come equipped with cameras.  These speed policing types of systems can be fixed or mobile.

Redflex, a photo enforcement company, uses a particularly lethal form of police radar to determine your speed.  The radar is horizontally polarized and very lower power.  Most detectors, give you essentially no advanced warning time.  Redflex is a for profit company that while not part of a police force, is contracted by municipalities to enforce speed.

Another form of radar is frequency modulated and can be found in a redlight and speed on green photo enforcement system called Gatso RT4.  Like Redflex, but for different reasons, it is also incredibly difficult for a detector to give ample warning.

Fortunately, both Redflex and Gatso RT4 systems are stationery and located at fixed positions meaning that a good GPS application like Waze can alert you to their presence without the need of a detector.

How do police use radar from a patrol car?

Police radar can be operated in a stationery position or moving vehicle. Most states allow radar to be operated by a patrol officer while driving (Pennsylvania is an exception). When it’s used  this way, it can also be quite challenging especially when operated in IO mode as a driver can come upon an officer on the highway around the bend and approaching in the opposite direction. This can make for a difficult ambush situation to avoid getting a speeding ticket.

Police can also use radar in unmarked patrol vehicles making early detection even more difficult. The state of Pennsylvania is unique in that only state police are able to use radar. In other states, both state and local police are permitted to operate radar as a means of traffic enforcement.

Radar—even in I/O form—when transmitted is fairly easy to detect from ahead with a good detector and is one of the best tools a driver can use today. The quality of detectors have improved dramatically over the years and even budget priced models, such as the Whistler CR97 can be a very effective device in mitigated its risk. Higher-end (with price tags to match) are available from Beltronics, Escort, Radenso, Uniden, and Valentine Research.

What is POP radar?

POP was marketed to change the ability of detectors to alert with ample range. If you think of detectors as specialized radio scanners, you will understand how POP radar sought to render them ineffective or at least give that appearance to municipalities who considered purchasing MPH’s radar guns so equipped.

The idea was simple in principle: if a gun transmits a single radar transmission lasting in duration for only 67ms, conventional detectors wouldn’t be able to detect a transmission of such short duration since they are spending time sweeping (scanning) the multiple bands (of X, K, and Ka) that all detectors must continually do.

While the 67ms version of POP has essentially been mitigated by all of the major radar detector manufacturers today – most radar detectors now have specialized circuitry to specifically detect it—MPH has introduced an even quicker version of POP that’s rated at a blistering 16ms (that’s 16 one-thousandths of a second!)

The frequency most often used for POP is 33.8Ghz Ka-band.  It can also be found on MPH’s K-band hand-held guns, although the most likely encounter you’ll have is against a patrol mounted 33.8 Ka unit.  Nevada is the place where you will most likely encounter police using MPH radar.  Police in Nevada are extremely well trained with these radar units.

Even the Valentine One detector – arguably the one of the best detectors for identifying POP radar, struggles with this form and alerts to it only about one out of every 10 transmission bursts. We have seen POP used more than once and have found that, indeed, it was capable of making accurate readings. That’s not to say it was not infallible.

Valentine Research has suggested MPH’s technology has been flawed and prone to error. Interestingly enough, MPH’s site has modified their website POP section indicating that speeding citations can not be issued solely on the use of POP.

We originally saw the potential of POP—allowing for traffic enforcement to be able to take spot-readings of traffic as a means of furtively taking speed readings prior to using the conventional operation for the purposes of issuing citations. In the final analysis, POP never became widely used and its theoretical advantages have been trumped by the proliferation of inexpensive police laser (LIDAR) guns which are much easier to operate and are far more lethal to us motorists.  Unless you know specifically that POP is being used in your area (not likely), I would suggest that don’t use that detection feature with a detector because it can actually lower its detection performance.

What states use POP radar?

Some states have contracted with MPH (the sole manufacturer of POP radar guns) and have been known to use those guns in the states of Florida, Georgia, Iowa, Mississippi, Nevada, New York, Oregon.  But that doesn’t necessarily mean that POP was used with any great frequency.  Police laser has essentially superseded any potential benefits of POP and is the preferred method of speed enforcement.  I was recently speeding in a remote part of Nevada and got pulled over by a police officer who indicated he clocked me with his MPH unit.  My radar detector did not alert, so I am assuming that the police officer used POP.

Unless you know that POP is being used in your region, we recommend keeping POP detection turned off on your detector.

Police are not supposed to issue tickets solely on the use of POP, but honestly there is really no way to know if that role is being followed or not.  Fortunately for us drivers, the use of POP is rare.

Newer guns now use digital signal processing (or DSP), these police radars are much better at measuring speed from greater distances and with greater precision than older analogue guns.  They also tend to use much less transmission power which in turn makes them harder to detect with a detector.

How far can my speed by determined?

Generally speed measurements are taken when you are within a 1000 feet and sometimes closer when an officer hides in a stationery position.  Fortunately, all detectors produced today can detect radar from distances that are generally much greater than that.

How can I fight a radar speeding ticket?

The only potential points of contention if you decide to challenge a speeding ticket was if it was your vehicle that responsible for a speed reading in an area where there were multiple cars.  These challenges are basically useless, because it is virtually impossible to actually prove that this was the case and the court tends to accept the testimony from the police officer as more authoritative.  Another method is to have the officer prove that his gun was calibrated according to the schedule set-forth by the state.  While this method sometimes worked in the past, officers today are generally well-trained in operation and follow proper procedures.

Attempting to use a radar jammer is a federal offense and although the equipment that has been available over the years, with very few exceptions, have had shoddy construction quality, dubious performance and companies offering them (even the ones proven not to work) have been prosecuted. The only enforcement technology today that can be legally jammed is police laser, although the use of laser jammers is outlawed in a number of states, provinces, and countries.

How is police laser different from radar?

Today’s police laser guns provide the same advantages of stealth operation and offer very quick acquisition of speed (provided you are not using a countermeasure like Veil. They also have the distinct advantage that tickets may be issued to potential speeders with every trigger pull.

Radar is not particularly efficient at determining a single vehicle’s speed when there are many vehicles on a crowded highway. With laser, the officer can specifically target your vehicle in much the same way a sniper with a scope does.

Since police laser is a highly focused beam of infrared light which barely encompasses the front of your vehicle even at a far distance, it makes advanced detection by other detector owners very difficult. Police laser is often operated at greater distances and that fact makes police laser a much more a lethal form of traffic enforcement technology.

The powerful combination of instant-on usage coupled with no advanced warning is the real threat of police laser. Even detector manufacturers acknowledge that laser detectors when used alone have less value in detecting it.

How can you avoid speeding tickets?

As mentioned earlier, your best bet is to invest in a good detector radar/laser detector and use a countermeasure like Laser Veil anti-laser stealth coating.

Fortunately you do have the ability to transform your detector from being ticket notifier into a ticket avoider when you use Veil to protect you.