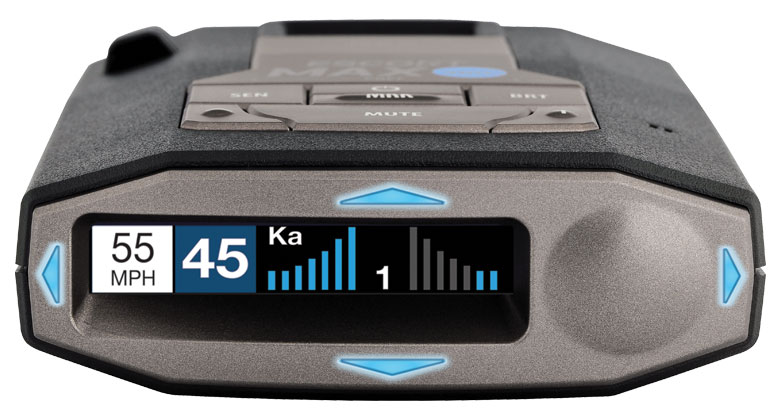 The new WIFI and GPS dual antenna Escort Max 360c is Escort’s new top-of-the-line halo radar detector and the first detector ever to incorporate WIFI connectivity, natively to allow integration into WIFI hotspots whether from the vehicle itself or your smartphone hotspot.

“Band Segmentation” comes to the Max 360

The Escort Max 360c is Escort’s latest example of producing a product that they had claimed that they weren’t going to, namely, a Ka-band segmented all digital M5/M6 (Max) platform based detector. Escort has maintained that–given the advanced digital signal processing nature of the Max series of detectors–sensitivity, performance, and signal rejection would not improve with band-segmentation like it did with the M3 platform of the Redline. It’s going to be interesting to see what the practical benefits of segmenting an M5/M6 bring.  Since the platform is lightening quick, expect improved Ka-band falsing resistance–especially from sweeping K-band signals from automobiles–not improved quickness or range.

But Escort didn’t stop there either. Apparently, the UltraDSP wasn’t enough to overcome the myriad of K-band collision avoidance systems that have overtaken the roadways today. And to be sure, the RF environment has gotten far more complex than even just a year ago. Other detector manufacturers like Uniden with their Uniden R1 and Uniden R3 radar detectors have proven that they can do a better job than Escort (and everyone else for that matter) at not only filtering out these annoying systems, but maintain a high level of detection performance to bonafide K-band while doing so.

Escort has been limited somewhat to relying of TSR coupled with their own filtering algorithm, BSM filtering, to substantially cut down on falsing. But by relying on TSR, you definitely take a haircut on performance.  (Note: Using TSR to enable IVT K-band filtering is no longer required on the Redline EX with firmware v1.30 and later).

There has been some early misinformation being spread and contrary to what is being reported on one youtube marketing video and on some related forum discussions, segmentation is actually not really segmentation like on other Escort “analogue” radar detectors, where actual ranges of frequencies are selectively eliminated from scanning.  Segmentation with the 360c is more akin to selective band muting.  While the bands are still actually scanned, alerts in the selected frequency ranges are simply not alerted to.  No improvements in performance or quickness are expected.

Escort’s track record with sensitivity to laser has been inconsistent over the years.  It was great on the Escort 8500 X50, iffy on the Passport 9500ix, just plain mediocre on the Max, but exceptional on the Redline, Redline EX, and very very good on the iX.  I’m expecting the 360c should be noticeably better on laser than the other Max series of detectors and capable of detecting more VPR guns than the now discontinued models.

More and more vehicles are coming with native WIFI support. This promises seamless auto-reconnecting to the Escort Live! cloud service without relying solely on a smartphone’s WIFI hotspot to do so. In this case, Escort Live! alerts can directly appear on the detector without the need of the app to run on a smartphone. This is really cool stuff, indeed.

In the past, Escort has relied on bluetooth pairing to smartphones to leverage the power of Escort’s crowdsourcing program, Escort Live! While the Escort Max 360c can still utilize bluetooth to do so, they have added the advanced ability to communicate using advanced WIFI signaling, the first radar detector ever to be able to do so. WIFI connectivity also brings the ability to directly update the detector’s firmware and Defender databases without having to rely on a USB cable. That would really be something, to have a detector to be able to update itself with the latest software. I suspect the WIFI platform could eventually enable it to serve as a hub to update other components, such as their Escort ZR5 (called the Escort ZW5 in its wireless form) laser jammers with the latest algos to defeat the latest generation of police lasers. Perhaps, I am getting a head of myself, but it certainly seems that all is possible.

Like the Escort iX, then the Escort Redline EX, the new Escort Max 360c comes with fabulous quick release magnetic mount stick sup. This is a real boon to the Escort Max 360c relative to the original Max 360. By having the mounting connection point on top of the detector, it moves it away from the back lens that had been a weak point in the original sticky cup design. It also will have the effect of making the detector appear smaller on the windshield because the rear of the detector will be brought somewhat closer to the glass.

Escort has been an early adopted of multi-color OLED displays, but candidly, they have been too dim to see during bright times of the day. Other manufacturers such as Cobra and now Uniden have proven that producing bright very readable full color displays have been possible. I am pleased to report that with the new Escort Redline EX and continuing with the Max 360c, Escort has finally produced a detector with very bright OLED display. With it’s deep offset, the display should be much more readable in a greater number of lighting situations. The Valentine One has been criticized by some for its size, although I never found it to be an issue. The original Max 360, on the other hand, WAS LARGE.

In fact it was huge by any standard. I’m pleased to see that Escort was able to put the 360 on a Nutrasystem diet. The 360c now looks more like a larger iX, than a smaller Max 360.  With a size reduction, comes weight reduction, as well.  As it turns out, the 360c is lighter than either the original Max 360 or the Redline EX.

While the front-end has gotten smaller, the arrows have gotten larger.  This is a good thing, in my opinion, and should make identifying the location of the radar source that much easier in a quick glance.

Escort continues to test the upper limits of pricing with their top-of-the-line radar detectors. As has typically been the case, the increase in cost over the original Max 360 is $50. This brings the Max 360c to an eye watering $699.00 retail. But there is no question you are getting a lot of features for the extra cash. For those, like myself who rely more on the free Google app, WAZE, such a capable radar detector may be overkill. In that event, the Escort Redline EX at $100 less retail could be your natural alternative.

On the other hand, as popular as the Max 360 has been, for those already committed to the platform, $50 is a small price to pay to get the uber advanced 360c, especially if the WIFI platform opens up a whole host of new capabilities in what’s possible in a radar detector.  Could WAZE integration be that far away?  Now that would be a killer combination, Escort Live! and WAZE alerts directly from a detector.  Enticing, isn’t it?

General release isn’t expected until 2018, but RadarBusters is currently collecting names of individual interested in getting on an early Escort Max 360c waiting list.

For those preferring to be early adopters, Escort is accepting orders for their “soft release,” as well.

A full review will be forthcoming shortly, but in the meantime, we have a short hands-on article giving you an early look at what’s to come.