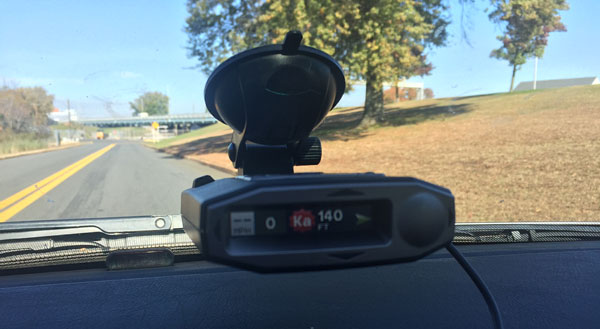 While the headliner for the new Max 360c may be that it’s the first radar detector to incorporate on-board WIFI, I think that buries the lead, the Escort Max 360c is Escort’s most surely footed detector when it comes to K-band collision avoidance signal rejection.  I think the 360c puts Escort back into the hunt with the very top detectors from other manufacturers, most notably Uniden and Radenso in how a detector should perform despite being actively interfered with by spurious RF that is unfortunately all too commonplace today on the roadways.

I’ve been finding that the new 360c is showing the Escort has finally solidly improved their BSM filtering algorithms WITHOUT the need for TSR.

In a number of extra urban driving, I was being pummeled by multiple K-band CAS systems including an Audi (24.08x) and GM/Caddy/Acura (24.2xx) and the 360c handled it all with great finesse.

I initially used K2 segment on only with TSR OFF with great success. Adding K3 was just as quiet. I then tried all four segments on with TSR OFF and it did very well too, although it appeared when I encountered a genuine K band CW source (drone sign), then a 24.06x alert briefly poked through the filtering, but then quickly disappeared.

This kind of thing can happen with other detectors, too.   What my experiences have been leading me to believe, is that the M5/M6 platform from a hardware perspective is very solid and it really has been just a matter of getting the “software” right.

It seems that the software engineers have finally turned the corner on effective BSM signal rejection while maintaining the ability to alert to genuine police radar at the same time.  That latter part of the last sentence is critical.  It’s one thing for a detector to remain quiet, but it’s another that its not rendered deaf, dumb, and blind when it needs to alert you to real police radar while doing so.

I have only managed to encounter genuine Ka police radar at 33.8Ghz.  The more popular variants of 34.7 and 35.5 I expect to see shortly once I make my way to Delaware and Maryland.

But that being said, the Max 360c seems to do very well with 33.8 Ka and continues to doing so WHILE being actively interfered with by K-band and K FMCW systems at the same time. One encounter showed the 360c pulled the legitimate signal out of the noise.  I was very encouraged to see this.

Also looks to be very good. The Max 360c alerted to the same weak X-band that typically only the M3s, including the Escort Redline EX, and Uniden R1 and Uniden R3 catch.

Also very solid as compared to my original STI-R, but with far superior signal rejection.

Although WIFI works well when connected, at the moment, it’s not easy doing so if you are attempting to connect directly to your own WIFI hotspot.

Once connected to the detector through the bluetooth connection with the Escort Live! app, the software indicates that you can not pair with WIFI unless you are already joined into an existing WIFI connection or if your phone is in hotspot mode.  The problem is,  the error displays even when you are in hotspot mode.  I was experiencing this with the latest version of Escort Live!, iPhone 6, and IOS 10.3.3.

I’ve communicated this “bug” with Escort already and they are working to fix it promptly.  In the meantime, you will need another iPhone to connect to initially.   Fortunately, I had an iPhone 8 hand to do just that.  Once connected, the detector did just fine streaming Live! alerts via WIFI.

If you are going to rely on your phone’s own WIFI hotspot, I would use it only for checking or doing software updates and not use WIFI for steaming Escort Live! as the bluetooth pairing with your smartphone does the same thing.  WIFI doesn’t really bring you anything extra.

If you have a vehicle with its own WIFI hotspot, that’s a different issue entirely.  In these circumstances WIFI makes detector integration seamless.


In terms of updating itself, the detector checks every time to see if updates exists (Defender gets updated weekly), firmware less frequently.  If an update exists and updating is enabled you will get prompted to install the update using the “+” key to accept the update and the “-” key to decline the update.

The good news is that if for any reason you lose power or your connection drops, you won’t risk bricking your detector as Escort has put in safeguards.  Another bonus is if the download data stream is interrupted, the download will resume from the point of failure and not start all over again.

Far more reasonable. Similar width to the Redline EX but slightly shorter.  The 360c is more a larger version of the Escort iX than a smaller version of the Max 360.  Weight-wise, the 360c clocks in just under 282 grams.  That’s about 12% lighter than the original 360 and nearly 20% lighter than the Redline EX.  Look at both models the 360 and 360c side-by-side I wonder, why on earth was the original Max 360 so darn huge to being with?

That quick-release magnetic sticky cup mount remains awesome and is interchangeable with all of their detectors employing that type of mount.


Coming off of the new Redline EX, I had high expectations, expectations that weren’t exactly met.

While the display is offset quite deeply, the benefits of hiding the display from direct sunlight doesn’t come without a drawback–namely the silver face can work against it in very bright daylight when half of the display can sometimes be adversely impacted by the reflection of the lower front silver bezel.  Perhaps it would be better to black that portion out as it would certainly cut down on the reflections and make the screen more readable in these lighting situations.

I only hope their progress on the software engineering trickles down to the rest of the detector line, which I trust it will.

Stay tuned as I will be posting more experiences and more videos of the 360c in the real-world.

For early adopters, Escort is accepting a limited number of orders.

A full review is in the works, so stay tuned!