Look out Valentine 1, this Escort has arrows! 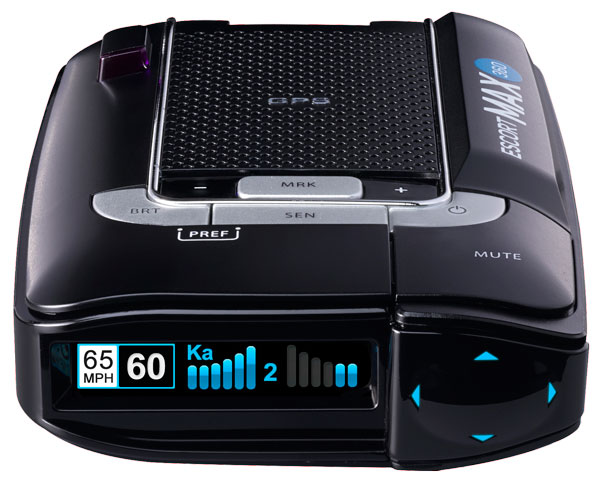 Mark this day on your calendar!  What’s the big deal, you say?

The new Escort Max 360, Escort’s new top-of-the-line windshield-mount radar detector, is its first ever to incorporate both a front and rear facing antenna to provide enhanced situational awareness with directional arrows.

This has been a feature long missing from every radar detector, except one–the Valentine 1.  In 1991, after Mike Valentine departed Escort (then Cincinnati Microwave), he patented the dual-antenna design of the Valentine 1.  For more than two decades, the V1 stood alone as the only radar detector capable of alerting its driver to the locations of the threat of both police radar and police laser.   And while the V1 remains one of my all time favorite radar detectors, its advancements over the years have been modest and evolutionary.

In this same period, Escort has been trailblazing with innovative new capabilities.  The only thing that has been “missing” has been the dual antenna design of the V1.  When Valentine’s patent expired in February of 2011, Escort quietly began engineering the Escort Max 360 radar detector that not only provides the front and rear facing antenna design of the V1, but incorporates many of the other innovations that in their own right, have made Escort great over the years.

The promise of the new Escort Max 360 is that one will get the situational awareness provided by the V1, but with a conveyance of even a greater amount of useful information by the detector itself. 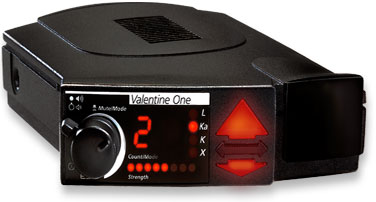 
Like the Escort Max and Escort Max2 radar detectors that have preceded, the Escort Max 360 features a four-colored OLED display that is capable of providing a rich set of information that far exceeds the ability of the V1’s display.

According to Escort, the Escort Max 360 has the ability to effectively track up to 16 radar “bogies” (technically more) but will display only up to four simultaneously, each with its own band identification and signal strength for both approaching and receding threats.  In additional to directional information, the Escort Max 360 display arrows also report distinct band information using different colors–green arrows for X-band, blue arrows for K-band, red arrows for Ka-band, and red arrows for laser.

Furthermore, the colors of the arrows will change when they go from primary threats to secondary ones.  I found that it can actually be a lot to process since there is so much information being displayed.  This Escort Max 360 is appearing to me to be directed towards sophisticated drivers who appreciate the intricacies of how and why radar detectors behave as they do.

This Escort Max 360’s display mode certainly conveys a much greater amount of information and in a more quickly identifiable fashion than the V1’s more simplified single colored LED lights and single digit bogie counter.  To get a rich amount of useful information with the V1, one needs to purchase the bluetooth module and run the V1’s app on your smartphone (but it is a glorious thing when you do, in fact, that set-up remains the high-water mark, even now, in sheer conveyance of information).

Like other radar detectors from Escort, this detector also has the ability to display the actual frequency of detected radar which can help savvy drivers quickly determine the severity and type of police radar that is being encountered.

The digital signal processing of the new Escort Max 360, appears to be more advanced and refined than that of either the Escort Passport Max or the Escort Passport Max2 radar detectors.  When the Escort Max was initially announced, I theorized that the advanced processing capability of their M5 platform, could/should be able to “filter” out the K-band alerts that stem from the automobiles’ radar-based lane departure and cruise control systems without any performance penalty. 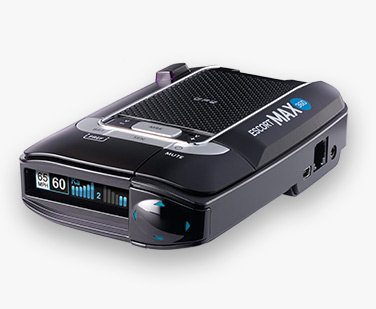 Unfortunately, this did not really turn out to be the case at that time and, as such, I felt the capabilities touted for the Max were overstated (or more aspirational).  The Max/Max2 radar detectors appeared to rely on standard “filtering” and alert timing delays to reduce the falsing that comes from these systems.

Escort may have finally been able to harness the advanced hardware processing capabilities and software with the Max 360 to eliminate or, at least, greatly reduce K-band falsing from these automotive systems without penalty to alerting to legitimate K-band police radar, either in sensitivity or quickness. This will bear itself over time whether or not they’ve been successful at doing this.

If indeed they have been successful, this would be a very significant accomplishment, especially for drivers like myself who drive in Pennsylvania, where ultra-low powered instant-on radar is used exclusively by the state highway patrol.  Escort has made some bold claims in the past with their Max detector on its product launch and it was later determined that some of those claims didn’t really pan out in the real-world, so only time will tell how effective Escort has actually been in this regard.

Escort refers to the Max 360’s platform as the M6.  For those of us waiting for a directional radar detector based upon the awesome M3 platform–that gives the Redline immunity from Spectre detection–we’ll have to continue to wait as the M6 platform is detectable by Spectre RDDs like their S7, M4, and M5 predecessors.

This means that the Max 360 shouldn’t be used in Virgina, Washington D.C., eastern provinces of Canada, military bases, and in commercial trucks.  Even though this detector is not built-upon the M3 platform I’ve been told that we should expect exceedingly high performance levels.

This Max 360 radar detector does not currently have the ability to be band-segmented like the Redline or Passports.  While they haven’t ruled out the possibility to me in the future, the manner and speed with which radar signals are analyzed may make this feature entirely unnecessary.

The overall performance of the 360 should exceed that of the Passport Max/Max2 radar detectors and be more in the realm of the Redline (or potentially even better in certain instances).  However, I wouldn’t be surprised to see the Redline remain the reigning champ in certain off-axis detections.

Like all Escort radar detectors, the Max 360 has both front and rear laser detection ability which means it makes a great pairing with the Veil Stealth Coating.

Just as with their other GPS-enabled radar detectors, the 360 comes pre-loaded with its Defender photo-enforcement database.  Additionally since the 360 knows what speed you are driving, its sensitivity can be reduced when you are driving slower and maximized when driving faster.  This is an especially nice touch for making this radar detector more painless to drive around town where stationery X-band and K-band door openers exist.

While I personally have been loathe to use the feature, the Max 360 also has the ability to (auto) lock-out known stationery false locations.  This can be helpful to drivers who routinely pass radar-based drones and speed signs on their daily commute.

The Max 360 has built-in bluetooth to enable the radar detector to be wirelessly paired to a smartphone and Escort’s crowd-sourcing Waze-like application, called Escort Live.  For a small annual subscription fee, Escort live users can share, in real-time, speed-trap encounters with other drivers in the area who also use Escort Live.

The detector’s chassis is superior to the Max/Max2 detectors and incorporates improved polymer construction and after personally handling the 360, I wholeheartedly agree.  The Max 360 also features magnetic coupling to the windshield’s suction-cup mount.  This is far better than the previous sticky-cup’s release button that was found on preceding detectors.

With those detectors, pressing the quick-release button on the top of them was a daunting task.  With this new system, attaching and removing the detector from the windshield can be done very quickly and easily.  The mounting bracket also reduces the tendency of a bouncing radar detector when driving on typical road surfaces.

I know what some of you may be asking yourselves at this moment: is the Max 360 going to be the end of the Valentine 1?  I seriously doubt it, because the V1 has decades of refinement under its belt, is an exceptional radar detector and laser detector, is less expensive by a good bit, and for good reason will continue to hold a loyal following.

Furthermore, Waze is a free crowd-sourcing smartphone application, owned by Google, which has a much larger following than Escort Live. Waze also has the ability to report mere sightings of speed traps (even those that are not actively using radar or laser) from many more drivers who don’t even own radar detectors.

Using a V1 with its connection LE and Waze together will remain an absolute killer set-up, irrespective of what Escort produces.  While Valentine may move slower than molasses in Winter, they’re not standing still either.  That’s not to say that the folks at VR won’t lose any sleep over the 360.  Perhaps now that they are no longer alone in this space, they’ll step up their own game to counter.

The Max 360 is priced at $649.00.  This is their most expensive windshield-mount radar detector ever and, in fact, the most expensive ever, by any manufacturer.  It’s $200 more than a Valentine 1 with the Connection LE module ($449).  But, for those seeking the ultimate in situational awareness in an Escort brand, it may be well worth it.

The manufacturer is a being very careful with the 360’s production release this time around and is still making last minute tweaks before releasing this detector (scheduled for mid-late October) and therefore a full and thorough real-world review will be forthcoming only when I have a unit that is truly representative of a finalized production model.

UPDATE: You can buy now directly from the manufacturer with the added benefits of getting free shipping, a fully warranty, a free 30 day test drive return guarantee.  Another excellent source to purchase detectors is RadarBusters.

Be sure to follow me on Google+ to receive more reviews and industry related news.

In the meantime, be sure to drive smart and ticket free.