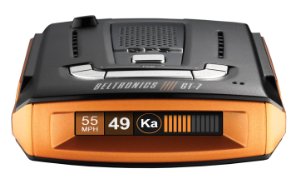 
Those of you who have been following me know that over the years I’ve been a big fan of Beltronics.  Some may also know that I’ve been disappointed that Beltronics hasn’t offered any substantive new products for quite some time.  With the introduction of the Beltronics GT-7 radar detector, this is set to change.  Even better, expect additional product announcements from them in the near future.  It appears that Beltronics is finally getting a much needed “dusting off.”

It appears, that at least for the foreseeable future, Escort will continue to be positioned as the “premium” brand.  Even so, this radar detector should perform above the levels of the Pro, Vector, and GX-65 series which means it’s going to be a welcomed addition to the Beltronics line-up.  Beltronics affectionately refers to this detector unofficially as the “copper series.” 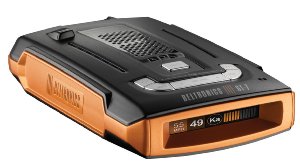 
As a comparison, while the case appears to be hardier than that of the original Passport Max, its more angular design lends itself to the confines of a Lamborghini (perhaps the smoother lines of the Max would make that model more suited for Ferrari owners).

My preference in radar detectors is for models that don’t attract undue attention.  But hey, if you’re fortunate enough to drive a Lambo or any other “bad-boy” car (especially in orange), the Beltronics GT-7 radar detector should fit right in.  I must say that I prefer the proportions and weight of this detector.


Like the Passport Max, the GT-7 has built-in GPS capability and includes the class-leading Defender database which provides early warnings to both red light and speed camera locations.  The detector also features the same improved magnetic mount of the more expensive Escort Max 360 which itself is a step up from the original Max.

If you wish to integrate the Beltronics GT-7 with Escort Live!, Escort’s Waze-like crowdsourcing app, you’ll have to invest in the optional Smartcord Live which retails for $99. That puts the price of the radar detector directly in line with the Escort Passport Max 2 which natively incorporates Bluetooth wireless connectivity.  However, if you forgo the cord, you can attain the performance of the Escort Passport Max for $50 less and that makes this unit a relative bargain.

Even more enticing is the fact that the Smartcord Live has occasionally gone on sale for only $49, which would essentially give you the capabilities of the Escort Passport Max 2 (which retails at $600) for $50 less giving the GT-7 a price advantage over that detector as well.

For a couple of reasons, I actually prefer the use of the Smartcord Live over built-in bluetooth.  First, the cord sports a built-in USB connector to power smartphones and second, the cord can be shared between multiple radar detectors from either Escort or Beltronics. 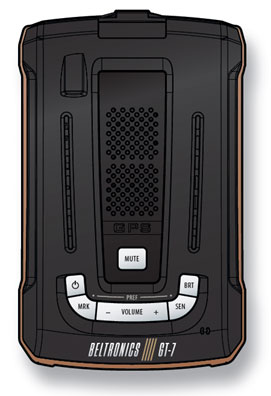 Beltronics has indicated to me that the GT-7 benefits from some firmware updates. Depending on the test drive outcome, if these updates proves to improve performance and filtering, that should place the GT-7 at the top of Beltronics’ windshield-mount offerings alongside that of the updated STi Magnum, making it a great candidate to be paired with the Veil G5 Stealth Coating.

As a car guy at heart, I think of the GT-7 and Max like that of the Toyota 86 GT and Subaru BRZ, respectively.  Although similar, each model appeals to different groups of driving enthusiasts.  So it may be with these two radar detectors.

Personally, I think I am partial to the Beltronic’s more aggressive (dare I say manly) appearance.  I think I would prefer a more subtle gun-metal gray accent color, albeit seeing it in person, the copper color actually looks quite nice and not as “orange” as the pictures would otherwise suggest.  I suspect the GT-7 may be more appealing to a younger predominately well heeled male demographic and as such be well placed in the overall Escort/Beltronics/Cobra line-up.

The GT-7 begins shipping on the 16th and my detailed real-world review will follow shortly thereafter.

If you want to be one of the very first to own one, you can order your GT-7 now directly from the manufacturer with the added benefits of getting free shipping, full warranty, and a 30-day free-test drive return policy.

Be sure to follow me on Google+ so you will be immediately notified when my real-world review is published.

In the meantime, be sure to drive smart and ticket free.

UPDATE: Read the full review of the Beltronics GT-7.